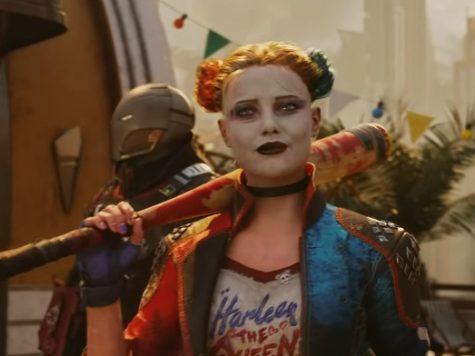 One of the biggest surprises (for me, anyway) of DC’s FanDome event was the announcement that Rocksteady, the studio behind the absolutely phenomenal Batman Arkham series, would have another go at the DC Universe. Even more surprising is that this won’t be a proper Batman game (there is also a Bat-Family game, by the way, but that one’s not a proper Batman game either…).

No, this is Suicide Squad: Kill the Justice League.

The game is set in Metropolis rather than Gotham City, which means Rocksteady has a brighter color palette to work with here. It features Harley Quinn, Deadshot, King Shark and Captain Boomerang as the Suicide Squad. And their mission? To kill the Justice League. Or, based on the trailer, to kill an evil version of Superman at least.

Suicide Squad: Kill the Justice League is not based on the James Gunn Suicide Squad film, but is instead its own independent story, which, honestly, I think is a good choice. In this day and age, there’s really no reason that an open-world video game should follow the story beats of a film property. Besides, Rocksteady has more than proven themselves with Batman: Arkham Asylum and Batman: Arkham City (and I’m willing to forgive them for the lackluster Batman: Arkham Knight at this point).

Additionally, this is supposedly set in the same universe as the Arkham games, so it’s sort of a sequel to Arkham Knight? The game has an open-world format, similar to Arkham City/Knight, but it can be played with up to four players cooperatively (it can also be played solo).

It looks absolutely insane, and I suppose it wouldn’t be a proper Suicide Squad game if it didn’t.

Seriously this has the potential to be incredible, though we won’t know for sure until 2022. The game’s release is still way off in the distance at this point.

In the meantime, you can watch the full trailer below.