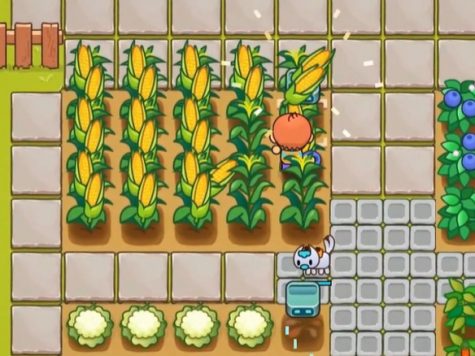 Stardew Valley was something of a phenomenon. Initially developed by just one person, the game has become one of indie gaming’s big success stories.

Of course, Stardew Valley was itself a take on the classic Harvest Moon games. It seems this type of farming-and-friendship game has since become a full-fledged genre, spawning some really interesting twists on the basic premise, such as the adorable Cattails and the grimdark, medieval Graveyard Keeper.

The next in line is Everafter Falls, which, like Stardew Valley, is being developed by a single person (under the moniker SquareHusky). The game’s cutesy exterior belies the fact that its premise is actually a little bit dark. See, in the game, your character dies and ends up in Everafter Falls, which is some sort of adorable afterlife… err… or maybe some Matrix-style real-world that you emerge from the simulation into?

The game will feature farming and crafting, obviously, but it appears there’s also some sort of card-collecting mechanic. The Steam listing page promises split-screen multiplayer as well.

The thing that really gets me, though is the adorable art style and ridiculously smooth animations. It definitely looks like a lot of love is going into this cute little farming game.

There isn’t a ton of information about Everafter Falls just yet, but if you hop over to the official website, you can subscribe to their mailing list and score a charming PDF brochure that gives you some more details about the game world. You can also follow SquareHusky on Twitter if that’s more your thing.

Everafter Falls has a vague release window of 2021-2022, and it will be available on Steam and Nintendo Switch.

You can watch the preview trailer for Everafter Falls below (I assume this is showing the Switch version, since there’s an A-button icon in the corner of the screen).