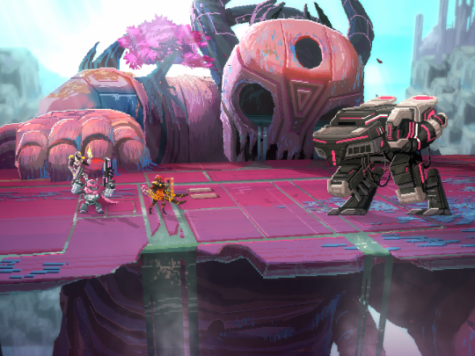 It’s possible to beat the Behemoth in Star Renegades on your first try, but things probably won’t go that smoothly. Thankfully, in this game, defeat is never the end. Instead, you can jump to a new dimension and try again.

While the first boss is Star Renegades is pretty tough, things will get easier with each attempt. The fight is also a lot more manageable with the right party and the right strategy.

The first character you’ll want in your party is Maryadi Penrave. Maryadi is a member of the Aegis class, which is all about defense. She can guard your characters and protect them against the Behemoth’s most powerful attacks. Maryadi also has the ability to restore her shields in battle, which can help to keep her alive for the duration of the fight.

While Maryadi won’t be in your party when you start the game, you’ll gain access to her after your first defeat. Her shields are invaluable against tough foes, which is why you’ll want to add her to your team as soon as possible.

You’ll also want Bentley, a Commando with some great armor-shredding abilities. Bentley’s armor-piercing rounds make it easier to take down the Behemoth’s ample defenses. Bentley also deals damage every time he’s attacked, even when he’s defending against a powerful attack.

Like Maryadi, Bentley will need to be recruited, but he is available very early on. He’s a great damage dealer and is highly effective against heavily-armored enemies.

For your third slot, you have a few options. Xurx Nrza is an Archon, a support class that can essentially function as a healer. With Xurx in your party, you can restore shields and keep your party around for longer. Xurx’s subclass, Shielder, increases his Shield Regeneration powers by 33%. This subclass also gives him access to card that allows him to strengthen your squad’s shields every time you camp.

Wynn Syphex is also an excellent option. As a Valkyrie, Wynn has the ability to taunt enemies, drawing attacks in her direction. She can also dish out heavy attacks that are highly effective against armored enemies like the Behemoth. Her Sunder attack, which unlocks at level 4, is especially potent during this fight.

Since both Wynn and Xurx are available at the start of the game, you’re free to decide which one you’d rather have on your team. If you’re struggling to keep your shields up, I’d suggest using Xurx, while Wynn is a better option if you need to dish out more damage.

Once you’ve got your party assembled, your focus should be on protecting your team from attacks while dealing as much damage as possible. The Behemoth’s Napalm attack is especially deadly. If a character is being targeted with this attack, you’ll want to have them defend or assign Maryadi to guard them.

The Behemoth’s Reboot ability allows it to restore its shields, which can be frustrating after a long fight. Try to take advantage of this opportunity and have Maryadi attack with Smash when this happens. Her Siphoner subclass will allow her to drain the Behemoth’s shields and refill her own.

If you decide against using Xurx in your party, you’ll need another way to repair shields. At the Armory, you can unlock the Colossus gear. With this equipment, you can add Auto-Regen to your shields, which will keep your team in much better shape.

With vigilant guarding and consistent attacks, you should be able to bring the Behemoth down. Don’t rush your way through the battle; always pay close attention to the type of attack the Behemoth is using, the amount of damage it’s dealing, and who it is targeting.

As long as you have the right team and stick to this strategy, you’ll be able to take down the first Behemoth in Star Renegades and move on to the next one.

I like JRPGs, life sims, and things that are cute. All my favorite games have toilets.