Home
Editorial
I Was Excited for Gods & Monsters; Less So for Immortals Fenyx Rising
Tweet Pin It 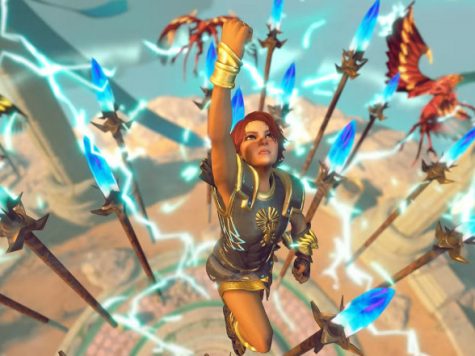 When Ubisoft originally revealed Gods and Monsters back at E3 2019, I found myself very intrigued. Having just come off playing Breath of the Wild, and finding a lack of similar titles to scratch my pre-existing itch, suddenly it felt like there was a new contender soon to hit the market — in February of 2020, which was the initial release window.

And considering the fact that Gods and Monsters was coming from the studio that developed Assassin’s Creed Odyssey, I felt like there might finally be a BotW-like without all of the boring Zelda crap that plagued Breath of the Wild.

But Gods & Monsters is now Immortals Fenyx Rising, and with the game’s new name came a brand new trailer.

Something is just not clicking with the new Immortals Fenyx Rising trailer. And I think it boils down to the art style and character and creature models. I was hoping for a more realistic take on the BotW formula — maybe something more Skyrim and less Kameo.

Ubisoft made a statement (to Eurogamer) leading up to the new trailer:

the game formerly known as Gods and Monsters has evolved in surprising ways, which is common when developing exciting new worlds… Much has changed since [E3 2019’s demo] in terms of features, tone, art and character design, and even the name of the game.

Reading this, I was hoping for more of a tonal shift than what we ended up seeing in the Immortals announcement trailer. To me, the phrase “much has changed ” sort of suggests, well, that much has changed. The difference between Gods & Monsters and Immortal Fenyx Rising, at least based on these two trailers (which is pretty much the breadth of what we have to compare the two iterations by), is slight at best. Yes, the main protagonist appears to have been aged up a few years and her facial features appear less rounded and pixie-like, but for the most part, there doesn’t seem to have been a sizeable change between the two trailers.

I was expecting the cartoony veneer to give way to something more akin to Assassin’s Creed Odyssey. Especially given that both games traffic in Greek mythology. Of course, too many parallels would mean Immortals might run the risk of just being an Assassin’s Creed clone so it would have been a fine line to walk. The again, aren’t all of Ubisoft’s games pretty much already just clones of a clone of a clone? But I digress…

Ultimately, I’ll just have to wait until I spend some time actually playing Immortals Fenyx Rising (Gods & Monsters was a better title, by the way) when it releases on December 3, 2020 (pending any future delays), before I can pass my final judgement.