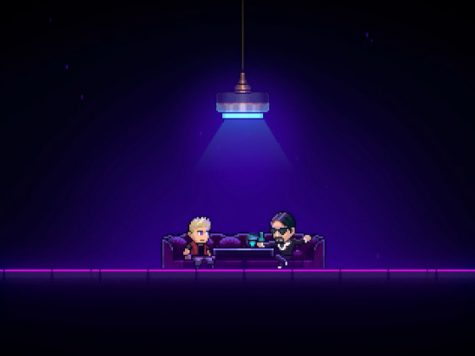 Neon Abyss has been a surprising darling of a game. I just happened to give it a shot while trying to unlock some Game Pass achievements, and I gotta say, Neon Abyss has gotten its hooks into to me. I’ve been playing it quite a bit ever since.

I am relatively new to the roguelike dungeon crawler genre, if that even is the correct category for this game (we’ve debated the technicalities of roguelike genre requirements elsewhere, so I won’t get into that here). I admit that it’s been a bit of a steep learning curve. But I am slowly putting the pieces together and getting better at playing the Neon Abyss with every initial leap from the dance floor to the battleground. Unfortunately, a good deal of that learning process takes place in wikis and online compendiums for the game instead of during actual gameplay.

Which leads me to my biggest pet peeve about this the game: Neon Abyss does not tell you what a power-up (or upgrade, weapon, or accessory for that matter) will actually do once you adhere it to your person (unless you have the Inner Eye perk, but that is a random drop so I don’t consider that an acceptable remedy).

The game is nice enough, I guess, to at least tell you what an item, weapon, or skill is called. In some cases does lend a small bit of forewarning as to what might be in store. But even then, that that falls short of giving you a full picture, and it’s not like I’m going to memorize every one considering there are like a gazillion of these items in the game.

I mean, the Traveler Hood gives you a double jump. I would’ve just assumed it might unlock points of interest on the map or give you a bonus to your movement speed…

So instead of the game just telling me that the Space Spanner gives me a chance to earn a free key with melee kill (which I would not expect based on name alone), I have to grab my phone, jump on a wiki, scroll through an enormous list to find the one item I’m looking for. In fact, one of the only compendiums with a built-in search feature also has garbage descriptions that don’t really give me any more information than the vague item names. If Neon Abyss just provided in-game descriptions of their items, I wouldn’t need these compendiums in the first place.

Maybe it’s just me, but this doesn’t diminish the immense amount of fun I am having with Neon Abyss. But a little bit of help for us old-timers would be much appreciated nonetheless.