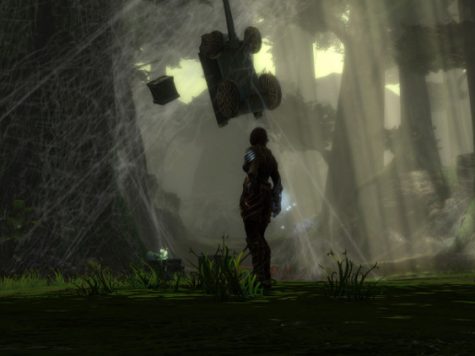 Kingdoms of Amalur: Re-Reckoning is an enormous game, especially considering it includes all of the content from the original 2012 release, plus all DLC (which includes two beefy story expansions and some additional goodies). There’s even more content on the way with the Fatesworn expansion due out sometime in 2021.

So if you’re looking to score the Platinum Trophy in Kingdoms of Amalur: Re-Reckoning, you have a long road ahead of you. I’ve posted a few pointers for getting some of the Trophies already, but there’s one Trophy that’s going to stand in the way of your Platinum if you don’t prepare for it from the very beginning of the game: Destiny Dominated.

The Destiny Dominated Trophy requires you to complete the game on Hard difficulty. In order to get this Trophy, you must set the game on Hard from the very beginning, and never — I repeat never — toggle the difficulty setting. Moving that slider just one time during your playthrough will cause you to be ineligible for the Trophy. (The game will give you a warning message if you touch the toggle at all, so you hopefully won’t end up adjusting it on accident.)

However, keep in mind that the Trophy is only for the main story. Like The Elder Scrolls V: Skyrim, Kingdoms of Amalur‘s main story is just one small piece of the pie. There are hundreds of side quests and several faction storylines to explore. If you don’t want to play through all of this side content on Hard, you actually don’t have to. Just beeline through the main story, and once you earn the Destiny Dominated Trophy, you can toggle the difficulty to as easy as you’d like and experience the rest of what the game offers.

You’ll know a quest is part of the main story because it will appear in the Main section of your quest log, accompanied by a blue woven heart icon (which you can see in the bottom-right corner of the screenshot below).

There are two other “Main” questlines, The Teeth of Naros and The Legend of Dead Kel, but those are from the game’s expansions and aren’t required for the Destiny Dominated Trophy. In fact, I would say that it’s best to save those questlines for when you’re at level cap (which is 40), so you can experience them as they were meant to be experienced (as well as getting the best possible loot).

Now, the story’s final area, Alabastra, seems like it’s intended to be started at around level 20. The difficulty of various areas does scale to the level you’re at the first time you enter them, but Alabastra doesn’t seem to scale lower than 20 — at least, not in my experience. I first entered it at 18 and got absolutely walloped, only to come back at 20 and find it to be about on par with the difficulty of the rest of the game leading up to that point. This means you might have to grind a few levels at some point in your journey through the story.

But for the most part, it’s a pretty smooth ride (with just a few difficulty spikes that can feel like they come out of nowhere). Make sure you save often and stay stocked up on healing potions and you’ll do just fine. I don’t even think the bosses are all that tough on Hard (even the final boss of the main story was pretty easy once I figured out the general concept of the fight).

There are some downsides to this method, of course. The primary one is that once you go back to clean up the beginning areas, you’ll find yourself ludicrously overleveled. You might end up turning the difficulty up rather than down.

The other downside is that the flow of the story serves as a guide to the game world, intending that you’ll spend a good deal of time getting distracted at various locales rather than immediately moving on toward the next story-based goal. To play the game as I suggested means you’ll have to resist the urge to get distracted by the absurdly deep well of side content — and being perpetually distracted is perhaps the game’s greatest joy.

I’ve always hated “Hard Mode” game Trophies, and I very rarely go for Plats in games with those Trophies. However, Kingdoms of Amalur: Re-Reckoning has this simple workaround that should spare you from having to play the game twice.