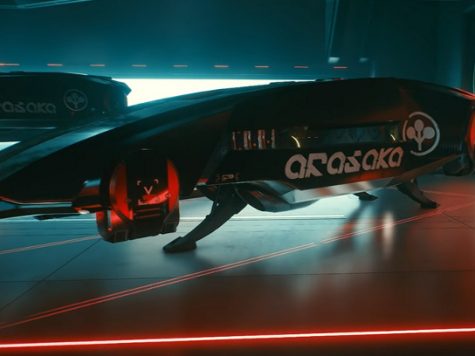 CD Projekt Red is certainly not stingy when it comes to including boatloads of free goodies with physical copies of their games. I remember being jealous beyond belief when I saw what Josh (the Half-Glass Gaming and Lightgun Galaxy site owner) got with his physical copy of The Witcher 3: Wild Hunt. If I had paid attention at the time, the convenience of the digital copy would have been greatly outweighed by all of the cool stuff the physical copy came with.

Well, believe you me, I will not be making that mistake again. I am very tempted to get the physical copy of Cyberpunk 2077 now that I’ve seen what even the standard edition of the game includes. You can check out the trailer below to see the content in action, but needless to say, it is actually pretty cool.

If you love lists as much as you love physical bonus goodies, then boy am I about to make your day. I’ve created a list of stuff that’s included with the Cyberpunk 2077 physical release.

This first item is a no-brainer; of course you get the physical box. But good box covers are a fine art that’s sort of dying. (The same can be said for instruction booklets, which have also been swept into the dustbin of gaming history.)

Although there hasn’t been much telegraphed as far as what one can expect from any possible instruction booklet for Cyberpunk 2077, the cover is still quite stylish. Sure, this is yet another game with a white guy holding a gun on the cover, but the striking yellow background definitely gives it some flare. It does come with a reversible cover, and I am assuming it will depict the female version of V (which I will more than likely choose for my character).

But hey, we’re not just here for the cover art. There’s plenty more.

A Map of Night City

I’ve loved physical game maps since Grand Theft Auto III, so I always feel a bit nostalgic when I see an open-world game that includes a physical map to go along with it. Keep in mind I am old enough to have been gaming before the widespread adoption of the internet. For me, using a physical map to chart courses, find points of interest, or glean possible shortcuts has always felt like a throwback to simpler times.

I especially enjoy maps that have real-world touches like legends or even sidebars with points of interest or hints. I’m hoping this Night City map will be a sidebar fever dream.

Much like with The Witcher 3: Wild Hunt, Cyberpunk 2077 comes with a world compendium. I assume this will give you a rundown of the various gangs and factions in the world, and possibly a few of the key players or leaders of said gangs and factions. It will definitely detail more of the game’s lore and setting. Now, this is just speculation, but it could even go into a little detail on things like the skill tree or maybe weapons types and/or possible upgrades.

I am all for learning more about game worlds that I find interesting, especially if that knowledge can give me a leg up in the actual game. Plus, I love to see any game world fleshed out, adding to the sense that it’s a real place with real inhabitants and real history.

My partner collects postcards, and although I don’t think Cyberpunk 2077 will perhaps necessarily be her cup of tea (she’s not much for first-person shooters or games with massive amounts of shooting and killing), she never passes up the opportunity to get more postcards.

I mean, c’mon, who doesn’t want free stickers? Put them on your locker or on a lightpost, though Half-Glass Gaming doesn’t promote vandalism to city property… do we? (Where’s the “wink wink” emoji?) Even if you never stick them anywhere, these stickers look cool and they’re free. So yes please, and thank you.

I haven’t heard everything the game’s soundtrack will have to offer, but music definitely seems like a huge part of Cyberpunk 2077‘s setting and atmosphere.

I mean, they hired the band Refused to basically make a bunch of songs as the in-game band Samurai, which is led by Keanu Reeves’ character Johnny Silverhand. So yes, music is a big part of this game. Whether the digital Cyberpunk 2077 soundtrack will just be the OST or feature exclusive tracks from Refused is yet to be seen, I guess.

Art booklets can be hit or miss, but based on the pedigree of CD Projekt Red I would expect more than just a few concept photos and character models. I could be wrong about this, but considering how gorgeous Cyberpunk 2077 looks, I’m sure whatever is on order will be a site to behold.

As someone who hasn’t played the Cyberpunk tabletop games, it would be interesting — from a historical standpoint at the very least — to see where Cyberpunk 2077 came from and maybe even get into the tabletop games themselves.

Wallpapers for Desktop and Mobile (Digital)

The prospect of digital wallpapers doesn’t necessarily have me chomping (or champing, for you old-worlders) at the bit, but free is free, Jack.

There are also a few extra pre-order items for the base game that are store-specific. I personally hate the idea of store-exclusive pre-order content because if you want more than one of the store-specific items, you have to make a tough call. Either choose the one you want more, or — and I strongly advise against this — you could pre-order multiple copies. Don’t do this.

But, you know, just for the record, here are the items in question.

If you pre-order Cyberpunk 2077 through Best Buy, you’ll get one of the three steelbook cases pictured above (along with all of the other stuff I already mentioned). Personally, I think this is the coolest of the store-specific bonuses, so this might be the route I go.

If you pre-order online you will be randomly assigned one of the three steelbook cases. Considering they all look snazzy, that might not be a big deal. If you pick up the game in-store, you get to choose, but it’s going to be limited to what stock each store has available. This might be a gamble during the current pandemic.

But if you happen to be a My Best Buy member, you will get a $10 rewards credit, which is an added bonus. Fear not, signing up is free, so if you are interested in being a member of yet another otherwise-useless store club, then you can also get that sweet, sweet free credit.

Less cool than the steelbook (but still cool, especially considering it is yet another free item) is the GameStop-exclusive Samurai medallion. It looks a little bit like a Witcher medallion, which I guess is no surprise. I personally wouldn’t ever actually wear it, and find it far less practical than a cool steelbook, but hey, the choice is yours.

If you pre-order Cyberpunk 2077 digitally through GOG.com, you’ll get bonus wallpapers and avatars, an exclusive digital game booklet, and some decent-looking Cyberpunk 2077 posters (decent-looking if you happen to be a teenager in the 1980s). Purchases on GOG also cut out the middle-person and directly support CD Projekt Red.

There is also a hefty Cyberpunk 2077 Collector’s Edition, which comes with everything included with the standard edition, along with even more stuff.

But don’t get your hopes up if you haven’t already snagged the Collector’s Edition, as it is sold out seemingly everywhere. There is a chance more will become available down the road, or that any unclaimed ones might go up for grabs later on, but otherwise I’m afraid you’re S.O.L.

So what do you think? Is this enough to get you excited for a physical copy of Cyberpunk 2077? I typically don’t bother with physical copies, as I just don’t have the shelf space for games and their corresponding goodies. Not to mention the fact that physical discs can be taxing on consoles.

That being said, I kicked myself in the butt after purchasing The Witcher 3 digitally, and I don’t want to see history repeat itself when it comes to the sweet pre-order items for Cyberpunk 2077.