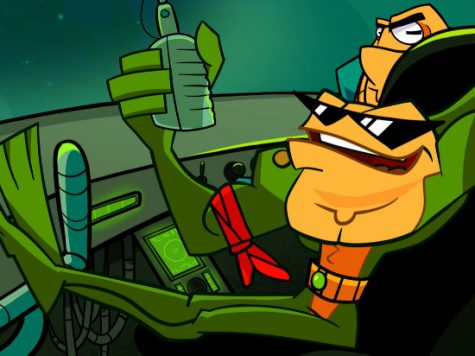 I will admit, I am not the hugest fan of side-scrolling arcade-style beat-’em-ups. They are mostly fine, but they ultimately tend to fall into the same trap, which eventually just makes them feel kind of grueling. And the new Battletoads game for Xbox One is no exception. In fact, it pretty much exemplifies my previous statement.

The gameplay, although par for the course, feels sluggish and old as dirt. The angular, Cartoon Network-style visual aesthetic is garish, and the script leaves much to be desired. In fact, the first few seconds spent in-game had my eyes rolling so much you’d think they were trippin’ on X at Rave World 2004.

Why do they continue to make games with groan-inducing, bad-even-for-the-1990s writing? Why does everything have to be so meta, referencing the the lousy elements or poor character development, instead of just fixing those issues and making a better game?

And look, maybe I should just zip it, because as I said, Battletoads is clearly not for me. How dare I even find myself worthy of speaking about it? But who is it for? Do people really look back fondly on these Ninja Turtle also-rans? I mean, I guess this must be intended for kids based on the grisly Genndy Tartakovsky-style character designs. Kids love square fingers and toes, after all.

But this game just feels like a checklist of nostalgia button-pressing written by someone who’s soul is so dead they’ve never felt a tinge of nostalgia in their sad, miserable life. And there’s no innovation here, not even an attempt at having something fun, clever, or interesting to say.

And I know that most everyone and their mailperson have bad-mouthed this game by now, so another naysaying voice of disapproval might seem a bridge too far (or at least to Terabithia).

But this new Battletoads game is a far cry from the original, which was sweeping game awards back in 1991. This one is just plain bad.