Home
Guides
Tony Hawk’s Pro Skater 1 + 2: How to Drain the Fountain in Philadelphia
Tweet Pin It 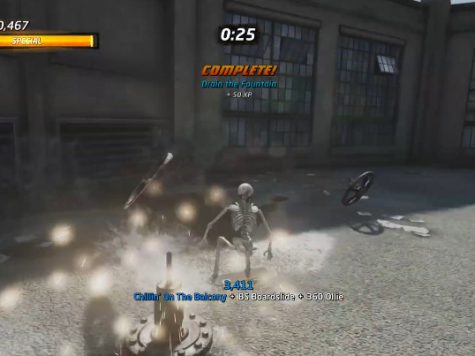 In the Philadelphia stage in Tony Hawk’s Pro Skater 1 + 2 (originally from THPS2), there’s a challenge that asks you to drain the fountain. In order to do this, you must hit a series of valves on a rooftop.

When you start the stage, turn slightly right so you’re riding parallel to the rail. There should be two ramps ahead of you, followed by a set of stairs. Just beyond those stairs is a building, and on top of it is where the valves are.

Now, it’s tempting to try to grind the wire where you find the Secret Tape, then leap to the right to try to make it onto the roof. That will actually get you where you need to go, but it’s tricky to pull off. There’s actually an easier way.

Remember those stairs I mentioned earlier? Simply grind the rail, then hit the planter just beyond the steps. Do a boneless (up, up, X on PS4) off the planters to launch yourself onto the roof. If you’re not quite confident you’ll make it, hit the grind button (triangle on PS4) to snap to the rail once you’re close enough, then hop off onto the roof. Once you’re on the roof, all you have to do is hit the three valves and the fountain should drain, completing the challenge.

Unlike the secret skatepark in this same stage, the pool stays unlocked on subsequent playthroughs. You’ll only ever have to drain it the one time.

And that’s how you drain the fountain in Philadelphia in Tony Hawk’s Pro Skater 1 + 2. If you want to see it in action, check out the video below.