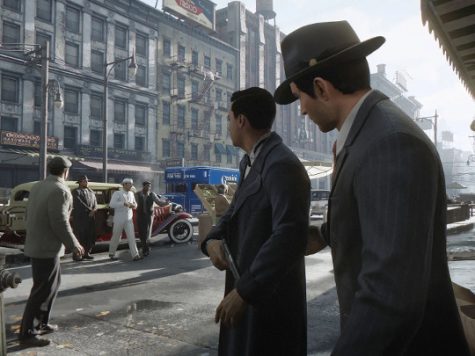 A 15-minute-long, in-depth look at the upcoming Mafia: Definitive Edition has arrived, and boy, does it look incredible.

Originally released for Windows in August 2002, Mafia (as it was known back then) was eventually ported to the Xbox and PS2 (but not until 2004). It was the PS2 version that gave me my first taste of this digital world of 1930s gangsters. I’m tempted to call it “an offer I couldn’t refuse.”

But it was also marred by grueling load times. When travelling from one section of the game’s city to another, the game would grind to a halt so it could load in the next area.

Now, load times were common (and hefty) at the time — I mean even Grand Theft Auto: Vice City, with released the same year as Mafia, fell victim to the lengthy loading screen. But unlike Vice City, which only seemed to take a dozen or so seconds to load, Mafia would take upwards of two minutes. That’s practically a lifetime when all you want to do is quickly finish a mission before bed.

The visuals were also greatly downgraded for the console port, but that was to be expected, especially considering the time period.

But all of that looks to be a thing of the past with Hanger 13’s remake, which is releasing September 25, 2020.

As the trailer clearly shows, the graphics have indeed been updated to what I am assuming is the engine behind the recent Mafia III. Hanger 13 also not only recreated the city setting, they also restructured some of the city layout to add more visual appeal. Here’s a statement from the official Mafia game website:

Rather than a straight port of the original Mafia to modern platforms, Mafia: Definitive Edition is a faithful remake that enhances the 2002 classic in every way, delivering an experience that’s even better than you remember. The beautiful presentation, with stunning visuals that are 4K/HDR-ready and a sweeping soundscape featuring an original score, breathe new life into this vision of organized crime in 1930s America. Lifelike cutscenes present Mafia’s narrative like never before, with Tommy’s gripping story faithfully captured and expanded to give insights into characters we only got to glimpse in the original game. And the immersive gameplay has been updated to entertain newcomers and old-school fans alike, with added features like a larger Lost Heaven to explore, motorcycles introduced as a new vehicle type, collectibles to seek out, and much more.

Thankfully Hanger 13 looks to be keeping the main story and elements that made the original game truly great, despite its performance issues. It’s a relief, because the story for the original game really went a long way in making Lost Heaven feel like a real place.

Although, now that I see it in writing, I wouldn’t necessarily mind an update to the name of the in-game city. But after the odd rollout for the Mafia III: Definitive Edition and the lousy remaster of Mafia II earlier this year, I’ll settle for this impressive remake and make my peace with the name Lost Heaven.

Mafia: Definitive Edition releases on September 25th of this year for PS4, Xbox One, and PC. It’ll cost $39.99 for the game, or $59.99 if you buy the full three-game Mafia: Trilogy bundle.

In the immortal words of Henry Hill, “As far back as I can remember, I always wanted to be a gangster.” And it looks like Hanger 13 is giving us another shot at following in Mr. Hill’s footsteps, for better or for worse.