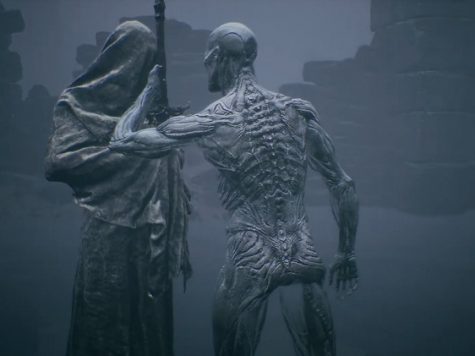 The “Soulslike” action RPG Mortal Shell doesn’t start players off with an epic narrative or grand, sweeping shots of its Medieval fantasy world. Instead it opens with a naked, gaunt, Voldemort-like figure emerging from the water. This, dear player, is your avatar.

Well, sort of. Not too much later in the game you’ll get your first “Shell,” which is basically a human body to inhabit. But for the sake of this article, I’m focused on the first six and a half minutes of Mortal Shell, in which you’re a Shell-less, skeletal being.

You’ll begin the game with no weapons of any sort, so all of your skills are defensive. You can dodge-roll (using the circle button on PS4), but there’s a more interesting defensive mechanic here called Hardening.

Hardening allows you to momentarily turn to stone, becoming invulnerable to basic attacks. The first enemy you encounter in the game will vanish once it unsuccessfully strikes you while Hardened, teaching you the mechanic in the process.

After that, you’ll find a sword, and there’s an ability that lets you Harden and attack at the same time. This basically causes you to Harden until attacked, then counterattack with your weapon. The catch being that it’s a bit difficult to pull off successfully, since you’ll have to get the timing right for it to work properly. It also has a cooldown, preventing you from spamming the ability. Thankfully, you’re given some time to practice it against an enemy that cannot harm you (it can hit you, but you won’t take any damage).

Plus, so far as I can tell, you are supposed to be defeated by the first enemy that can harm you, Hadern (though there is a Trophy for beating him, so he is defeatable). He can use Harden too (and, would you look at that, his name is an anagram of Harden).

This is shaping up to be a pretty interesting addition to the “Soulslike” formula, and I’m intrigued to see what possibilities open up deeper into the game.

You can see the first six and a half minutes of Mortal Shell in the video below. Be warned, I spend a good deal of time practicing the Harden mechanic and being terrible at combat.