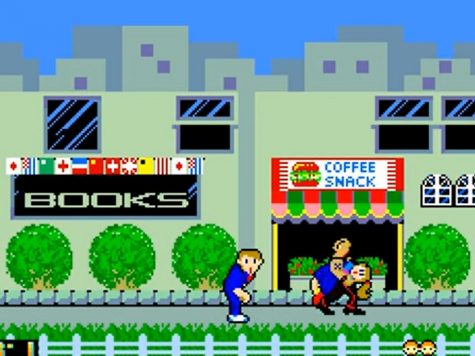 American cities in the late 1980s were gripped by fear, as a rash of seemingly unrelated, seemingly unmotivated abductions were taking place all over the country. Swarms of bad dudes and gang members — heck, even ninjas — were grabbing women off city streets, stuffing them under their arms like Christmas gifts, and running away with them.

It seemed that nowhere was safe amidst the countless reports of women being absconded, sometimes in broad daylight, in seemingly normal neighborhoods. The most famous of these abductions was Marian Kelly, who in 1987 was kidnapped in Los Angeles, California.

However, a few years before the Kelly abduction dominated the news cycle, there was a lesser-known incident that is perhaps far more noteworthy, as it is one of the earliest cases to inspire a based-on-a-true-story arcade game. The incident was the abduction of Caroline Remy, and the game was the 1985 smash hit My Hero (Coreland/Sega).

A grizzly tale, the game had to downplay some of the details in order to find placement in bowling alleys and arcades across the nation. Even so, My Hero was instrumental in the capture and arrest of Ernie Gene Walker, who was responsible for the Remy abduction, as the game used Walker’s name for its final boss.

After some investigation, it came to light that Walker had worked for a vending machine company that serviced machines in the breakroom at Copeland, the development studio behind My Hero. Over the course of his service calls, he would ultimately confess to the abduction, allow for his name to be used, and even provide his mailing address. The authorities later made use of these confessions, which were secretly being recorded, to apprehend Walker.

Despite leading to Walker’s arrest and the safe return of Caroline Remy –who was completely unharmed and, in fact, had only been abducted to help Walker complete his taxes — many would argue that My Hero inspired the rash of kidnappings that occured in 1986 and 1987. Some would even go so far as to blame My Hero for the abduction of Marian Kelly herself. The game, it was said, was basically a training manual for tucking women under your arm like a loaf of bread and running off with them.

Whether or not this has any merit is still very much up for debate, and the fact that My Hero is a lousy game doesn’t really help settle the matter.

But that is an argument for another time.