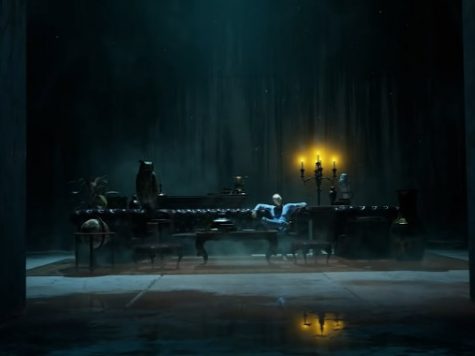 Back in 2014, fans were still salivating over footage for the then-upcoming Batman: Arkham Knight (which actually turned out to be a little disappointing in my opinion). In June of that year, I wrote about how I wanted to see Rocksteady do a Court of Owls video game.

In case you aren’t familiar, the Court of Owls comes from Scott Snyder and Greg Capullo’s amazing run in Batman comics. The Snyder/Capullo Batman run was one of the best Bat series in recent history, with Snyder’s incredible, twisted writing and Capullo’s amazing art. It all kicked off with a story about the Court of Owls, a secret society that had been pulling the strings of Gotham City for more than a century.

It’s fantastic stuff, and I’ve been hoping for a Court of Owls video game for years now. It turns out, this wish — which honestly seemed like a pipe dream back in 2014 — is coming true in 2021 with Gotham Knights, which actually isn’t being handled by Rocksteady (Rocksteady has their hands full with the Suicide Squad game, it turns out). This one is the work of Warner Bros. Games Montreal.

Gotham Knights is an open-world Batman game… well, correction: Gotham Knights is an open-world Bat-Family game. See, if the trailer is to be believed, the game takes place after the death of Bruce Wayne. Bruce, being prepared for absolutely everything, has created a contingency plan that involves a teamup of Tim Drake as Robin, Jason Todd (who used to be Robin) as Red Hood, Dick Grayson (who also used to be Robin) as Nightwing, and Barbara Gordon (who I don’t think was ever Robin) as Batgirl. All of this makes so much more sense if you’ve been reading Bat-comics, I suppose.

If you want more information on each of the characters, Warner Bros. Games issued a press release with some details.

Part of me suspects that this is some sort of fakeout, that Bruce Wayne will be back by the end of the game. However, Rocksteady did kill off Joker in Arkham City, so it is possible that Warner Bros. Games Montreal will keep the Dark Knight in his grave for the duration of the Gotham Knights story.

You can watch the full trailer below.

On top of the trailer, we also got about seven minutes of gameplay footage. While this footage is Owl-free, it does feature Mr. Freeze and some really cool Batgirl gameplay.

You can check out the Mr. Freeze gameplay footage below: